Refocusing our Sponsors Program; a call for new Sponsors in specific countries

Some small organizations who want to register metadata for their research and participate in Crossref are not able to do so due to financial, technical, or language barriers. To attempt to reduce these barriers we have developed several programs to help facilitate membership. One of the most significant—and successful—has been our Sponsor program. Sponsors are organizations that are generally not producing scholarly content themselves but work with or publish on behalf of groups of smaller organizations that wish to join Crossref but face barriers to do so independently.

This blog post is from Lettie Conrad and Michelle Urberg, cross-posted from the The Scholarly Kitchen. As sponsors of this project, we at Crossref are excited to see this work shared out. The scholarly publishing community talks a LOT about metadata and the need for high-quality, interoperable, and machine-readable descriptors of the content we disseminate. However, as we’ve reflected on previously in the Kitchen, despite well-established information standards (e.g., persistent identifiers), our industry lacks a shared framework to measure the value and impact of the metadata we produce.

When Crossref began over 20 years ago, our members were primarily from the United States and Western Europe, but for several years our membership has been more global and diverse, growing to almost 18,000 organizations around the world, representing 148 countries. As we continue to grow, finding ways to help organizations participate in Crossref is an important part of our mission and approach. Our goal of creating the Research Nexus—a rich and reusable open network of relationships connecting research organizations, people, things, and actions; a scholarly record that the global community can build on forever, for the benefit of society—can only be achieved by ensuring that participation in Crossref is accessible to all.

In August 2022, the United States Office of Science and Technology Policy (OSTP) issued a memo (PDF) on ensuring free, immediate, and equitable access to federally funded research (a.k.a. the “Nelson memo”). Crossref is particularly interested in and relevant for the areas of this guidance that cover metadata and persistent identifiers—and the infrastructure and services that make them useful. Funding bodies worldwide are increasingly involved in research infrastructure for dissemination and discovery.

Typically, when an editorially significant update is made to a document, the publisher will not modify the original document, but will instead issue a separate document (such as a correction or retraction notice) which explains the change. This separate document will have a different DOI from the document that it corrects and will there have different metadata. 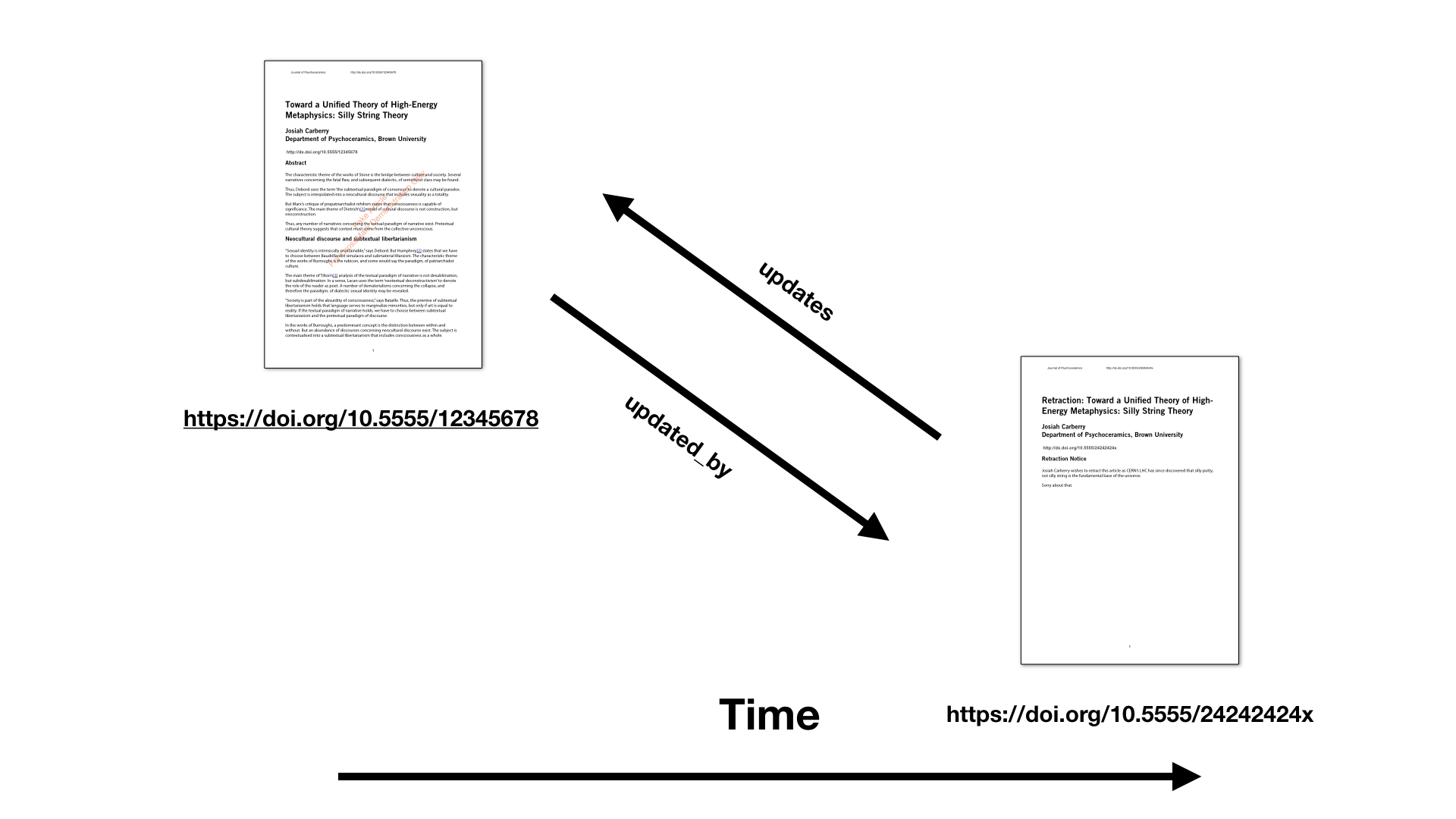 In this example, article A (with the DOI 10.5555/12345678) is eventually retracted by a retraction notice RN (with the DOI 10.5555/24242424x). Each document has Crossmark metadata, but the fact that RN updates article A is only recorded in the RN’s Crossmark deposit. The Crossmark internal API has to tie the two documents together and indicate in metadata of the original document (A), that it has been updated_by the second document (RN).

This is a simple example of article A being retracted by a retraction notice RN where both A and RN have Crossmark metadata deposited.

First, the PDF is produced and the XML deposited to Crossref.

When the retraction is issued, it is issued as a separate “retraction notice” with its own DOI, PDF, and Crossref metadata.

This is a simple example of article B being corrected by a correction notice CN where both B and CN have Crossmark metadata deposited. The only real difference between this and the previous example is that we are creating a different kind of update.

When a member does not issue a separate update/correction/retraction notice and instead just makes the change to the document (without changing its DOI either), this is called an in-situ update. In-situ updates or corrections are not recommended because they tend to obscure the scholarly record. How do you tell what the differences are between what you downloaded and the update? How do you differentiate them when citing them (remember, we are only talking about “significant updates” here)? However, some members need to support in-situ updates, and this is how they can be supported.

Example 4: correction of article that has no Crossmark metadata deposited

Still, note that if you query Crossmark metadata for Article E, you will get a Crossmark stub which has been automatically been generated by Crossref.

The procedure for updating the content follows the same pattern as a simple correction or retraction:

Sometimes members issue correction or clarification notices which provide corrections for multiple documents. This too can be supported by Crossmark. In the following example, one correction/clarification document provides updates to two documents (F and G)